It feels like it’s been a while since I wrote an update! everything is still going well for me, there’s some changes coming up as the girls I work with leave and new ones come, but we’ll worry about that as we go.

Today was a high of 31 but it was only 20 at 9am and I was the only one who wasn’t complaining about it being cold out. The other girls looked at me and said “are you sure you’ll be warm in just a dress today?” It’s so funny to me that anyone actually thinks this is cold, but I also missed the hottest part of the year and I was still way too hot.

Despite being a fairly quiet week we have had some excitement in the bar. A group of very young people came in one night and one of them set off the fire extinguisher while I was bartending, which is not at all fun to clean up. They got themselves banned for life from our bar and every other bar in a 100 kilometre radius because of this, at only 19! In a town with one bar which is the hi of all social events, that would be really awful. I personally didn’t feel bad for them, especially after cleaning up all the powder, which burns your lungs if you breath it in (and I did).

Every Thursday everyone in town comes into the bar to fill out these “tipping cards” for rugby. They basically just pay $50, choose which teams they think will win every week and at the end of the season whoever has the most right wins all the money in the pool. It’s very similar to the NHL Pick Em’s Carson usually does at the gas station. I’ve started watching some rugby because it’s on EVERY night and learning some of the rules. It seems like a weird mix between football and soccer with less rules about physical contact to me, but it is an entertaining sport.

Today we went into Moree again in the morning although it wasn’t my day off, because Olga (German) is leaving tomorrow and Allie (American) is leaving Monday, we all went for breakfast together and did a few other errands they needed to do. We went to a place called Cafe Omega which was so cute and had amazing food. I really loved the art they had up.

We also stopped at a bar called The Post Office Hotel in Moree for a quick drink and did a mini photoshoot because the hotel is so pretty. 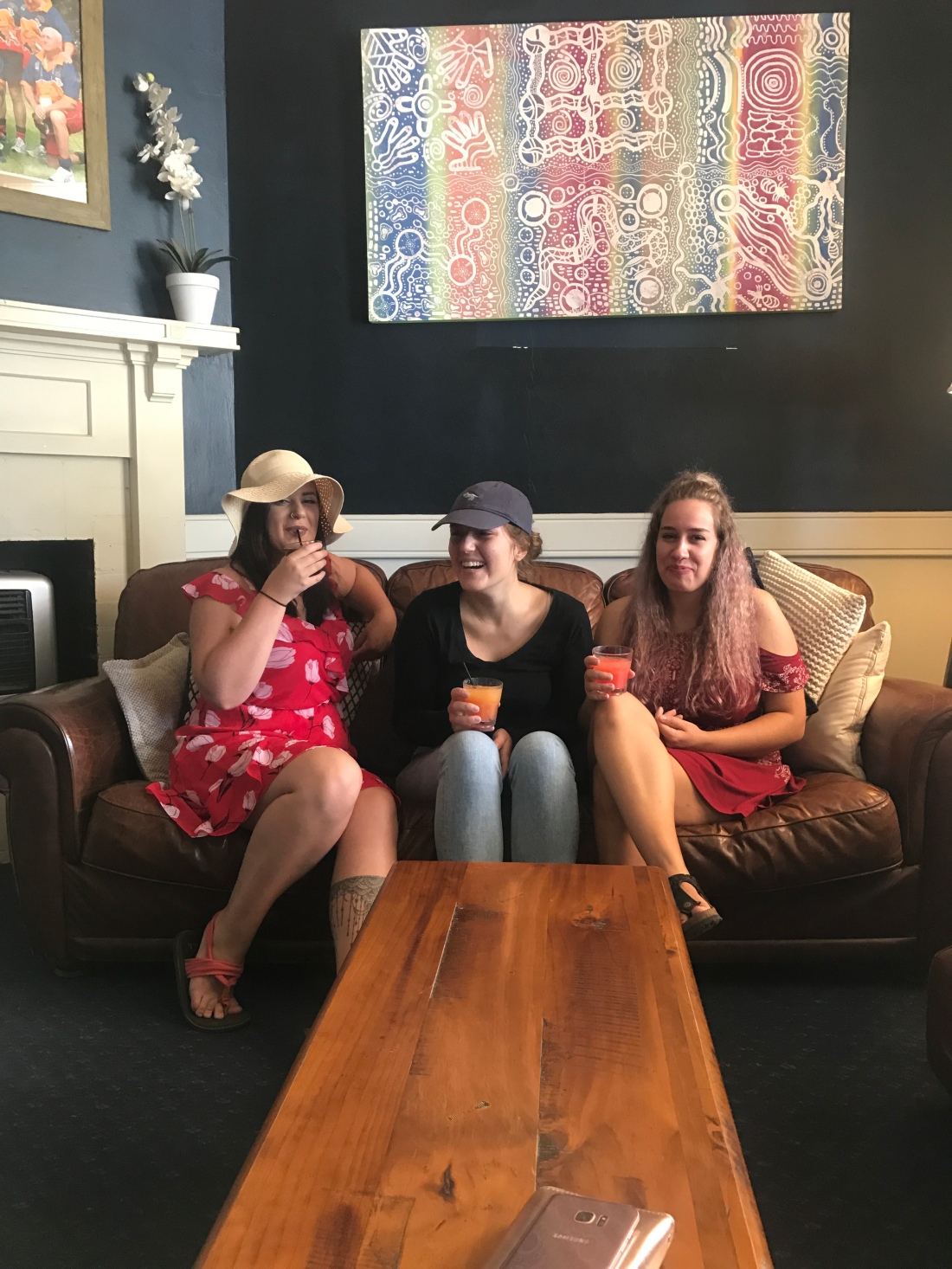 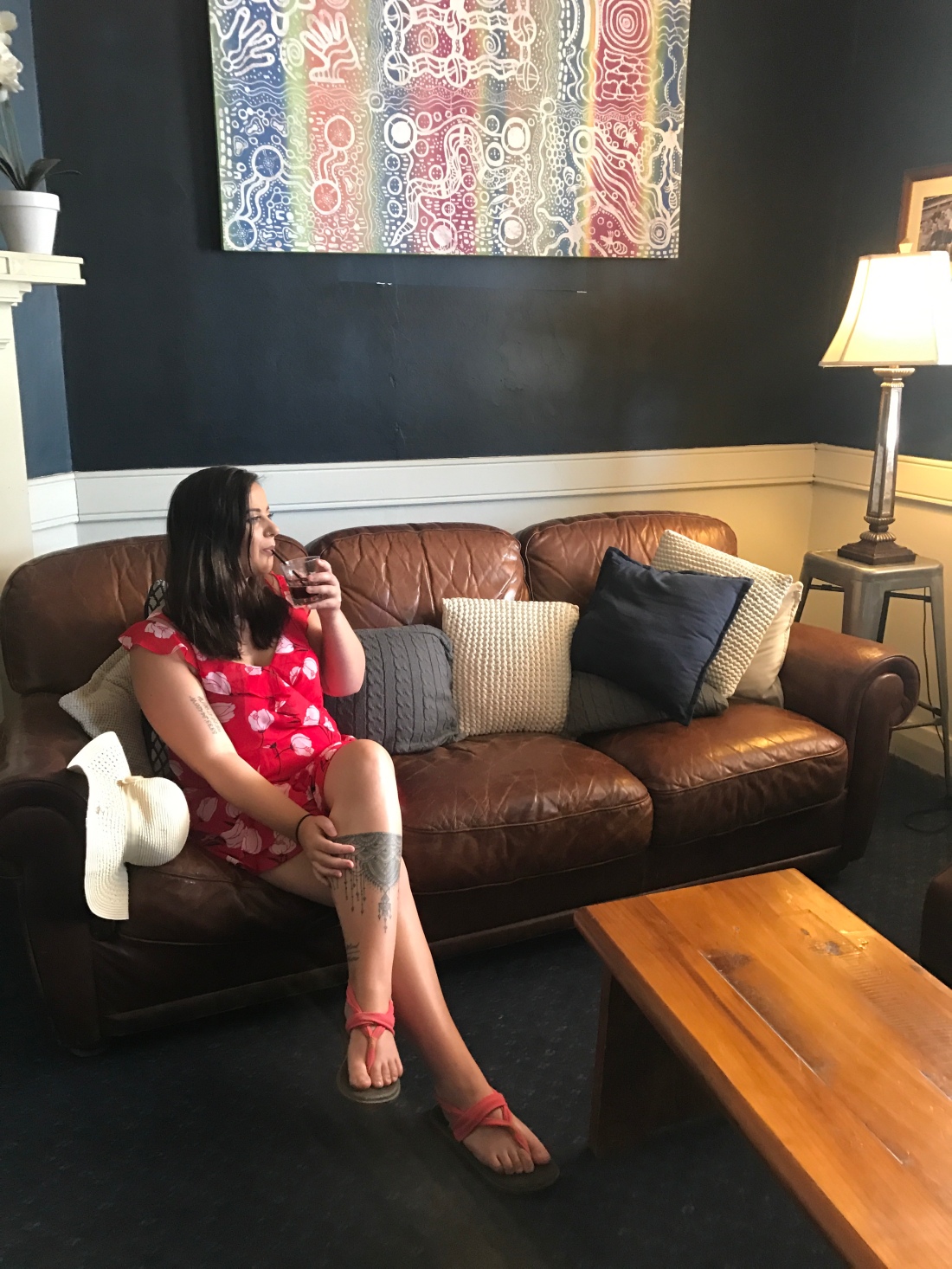 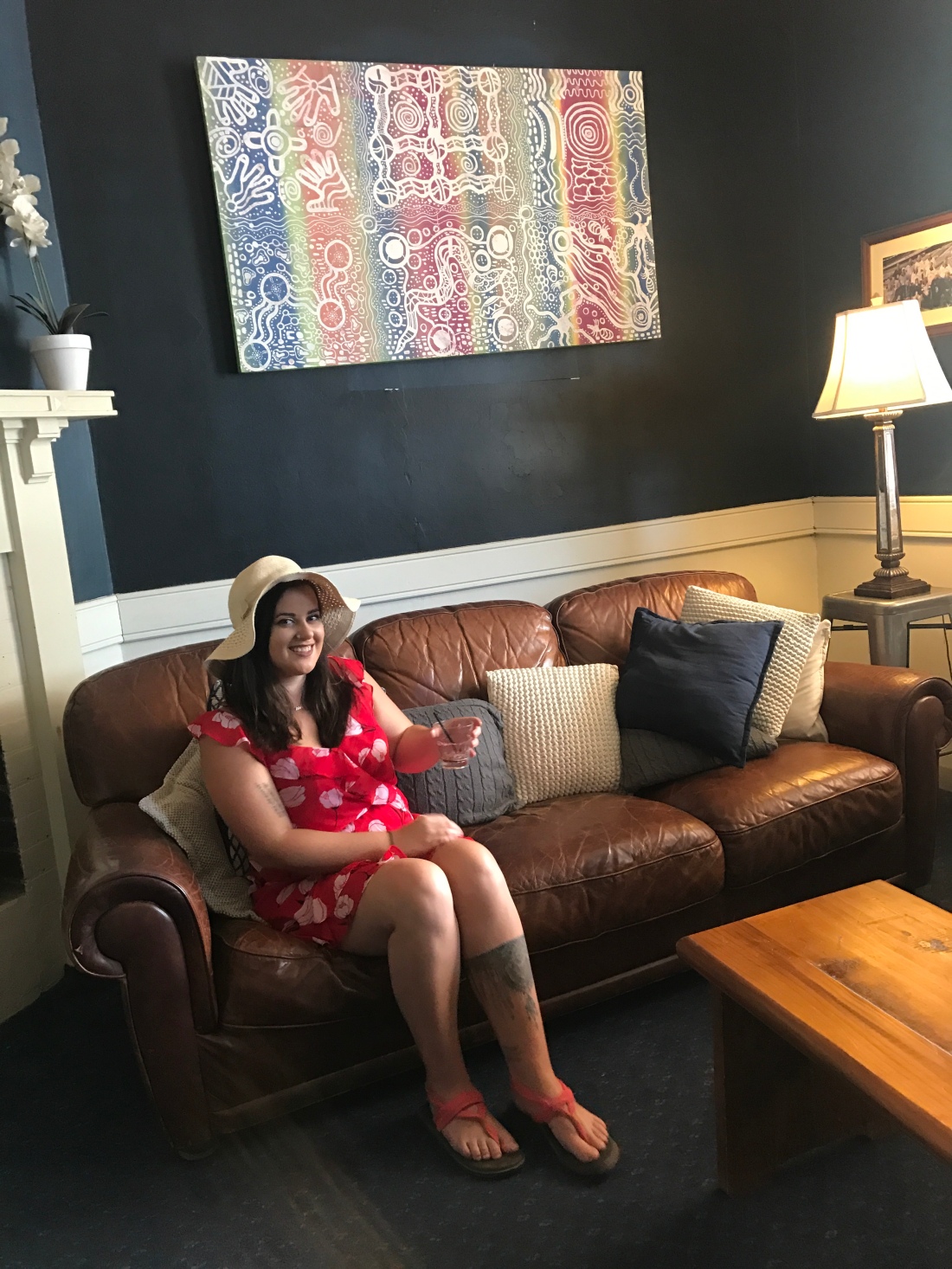 Francesca (also German) is leaving in a couple weeks as well. There is one new girl coming from the UK and because it’s been so slow it’ll just be the two of us working here by the end of April instead of four of us. I’m really hoping I get along well with her because if it’s only us two I’m going to have to, or work won’t be very fun.

I’ll definitely miss the two German girls when they leave. Their English is really good for the most part, once in a while they might not know a certain word or I’ll explain something in a different way and then they’ll get it. There were a couple times when we really misunderstood each other that were absolutely hilarious though!

My favourite was “fresh water”. If you translate the German word for fresh water literally it means “sweet water”, which is the opposite of salt water so it sort of makes sense. But because of this they thought we called it sweet water in English too. I was talking about a lake in Canada and one of them asked me, “is it salt water or sweet water?” And I couldn’t even stop laughing long enough to explain that.

I also love when they call insects animals. For example, Francesca always says “I’m so afraid of those tiny animals jumping on me”. It just sounds so cute how they say things in a very literal way.

Allie also says some funny things sometimes. One of the German girls asked us once why a thousand dollars is called a grand, and neither of us had an actual answer. It’s just one of those things we say and never really questioned where the term came from. My boss chimed in and told us Australians would call a thousand dollars a ton because 1 ton is 1000 kilograms, which makes sense. Allie, of course not knowing the metric system that well, said “well that still doesn’t make sense because a ton isn’t like a REAL unit of measurement” so I actually had to explain to her that it is in fact a real measurement.

As funny as it is hearing these things I try not to laugh because I know there are plenty of times I say something that no one understands or I don’t understand what someone is asking me for too. Australians speak English but they have so many different terms and slang that mixed with the thick accent I often don’t know what people are saying. If someone has a really thick accent, I miss whole sentences. I have to ask them to speak slower and focus just on them to actually understand them, but if it isn’t directed at me I usually just smile and pretend I know what we’re talking about. The longer I spend here the better I get at deciphering the Aussie slang, but it’s still really hard!

I also had my first standard driving lesson this week! Francesca said I did very well, and she was a really good teacher despite not really knowing how to say “clutch” or “reverse” in English. I’ve been coined the worst driver in Boomi by one of the regulars at the bar already, but there’s only 50 people in town so it’s not like I’m really that far down the list! He saw us driving around town and I told him I’ll only get better the more I practice and he said “well you definitely aren’t going to get any worse!” I withheld that I’ve often been called the worst driver in Canada by my family because I didn’t think that would help my case.

I’ve also got in the habit of walking for about an hour every day. Not that there’s much to see but it’s nice to be outside enjoying the weather and getting some exercise. I got bored of walking around town and I found a route that goes down a gravel road to the cemetery and back and takes me a whole hour to do, so that’s my new routine.

Sometimes when there isn’t a lot going on I get a little homesick, just because it seems like so much is happening that I’m not there for. I get over it quickly though because I’ve met so many great people here and I’m almost always busy. Getting used to the slower pace of life in the country took some getting used to but I’m really loving it now!